Joseph Fourier and the Fourier Transform

Joseph Fourier was a French scientist in the late 18th and early 19th centuries. He made important contributions to subjects ranging from algebra to thermodynamics, including early studies on the greenhouse effect on Earth’s climate, but today is best remembered for his discovery that many mathematical functions can be approximated more simply as a sum of basic trigonometric functions (sines and cosines).

This process is particularly useful to us because of the realization that you can analyze the structure of any waveform by breaking it down into a series of sine waves. By doing this, we can represent the wave as a list of simple sines and cosines, and their relative amplitudes and phases. We can build up a complex waveform by taking a single sine wave, then adding harmonics of it (sine waves whose frequency is an integral multiple of the fundamental sine wave) in different amplitudes and different phases.

We can then work with these sine and cosine waves mathematically in order to manipulate the original waveform. This is used in modern technology for many things, from audio equalizers on music players, to cleaning up errors in digital photographs, to analyzing the complex interference patterns from spectroscopy and crystallography used to identify substances in the laboratory.

This all sounds very complex; but the fundamentals of it are quite simple, and you can try it for yourself!

Each of these pairs of images represents a single waveform. In the first picture, we see the full wave. In the second, we see the Fourier Transform of that wave – the spread of sine waves of different frequencies that can be assembled to build that waveform. Each spike in the Fourier Transform graph represents a sine wave; the height of each spike is how large the amplitude of that sine wave should be to make the full wave.

When the waveform we put in is just a sine wave itself, of course the Fourier Transform of it is a single line – it’s just that same sine wave again!

This more complicated sawtooth wave is made up of many Fourier components – multiple sine waves. As the frequency goes up, the amplitude goes down.

These graphs were all created with an oscilloscope and waveform generator in our facility; check one out here! 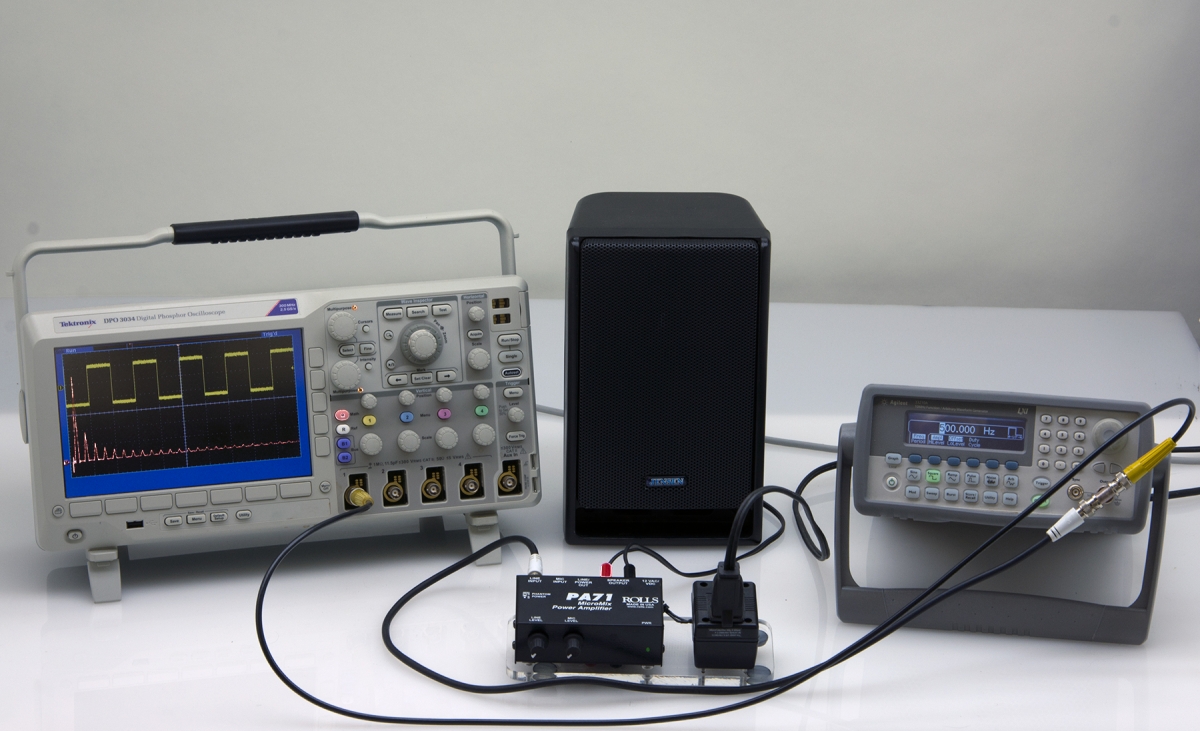 Now try it for yourself! Here are some more waveforms:

Make Your Own Waves

Even without a complex electronic synthesizer, you can try this at home with a simulator.

This interactive simulator in the PhET collection lets you build up waveforms by adding Fourier components: https://phet.colorado.edu/en/simulation/legacy/fourier

And the Falstad collection has another interactive simulator to discover the Fourier components of many different wave forms, and see how the breakdown of components changes when the wave does. You can also turn on the sound generator and compare how different waveforms sound to your ear. Try it out, and see what you can change in a wave to change what you hear – and what you can change and have the wave still sound the same. Can you hear a chance in frequency? A change in phase? http://www.falstad.com/fourier/

Try out both, and see what waves you can build and explore!