A question that came in via Twitter recently is one that comes up a lot this time of year, as we tend to want to spend more and more time curled up with a warm beverage. How does my little round teapot fill up so many cups? And why is the tea in the pot still warm when the tea in my cup has gone cold? The answer comes down to geometry!

Here’s a pretty ordinary sized teapot from the cabinet, and an official UMD Physics mug. We’ve tested it twice today and confirmed: This teapot can fill this mug six times. Sure, the pot is bigger than the mug, but it doesn’t look that much bigger, right? 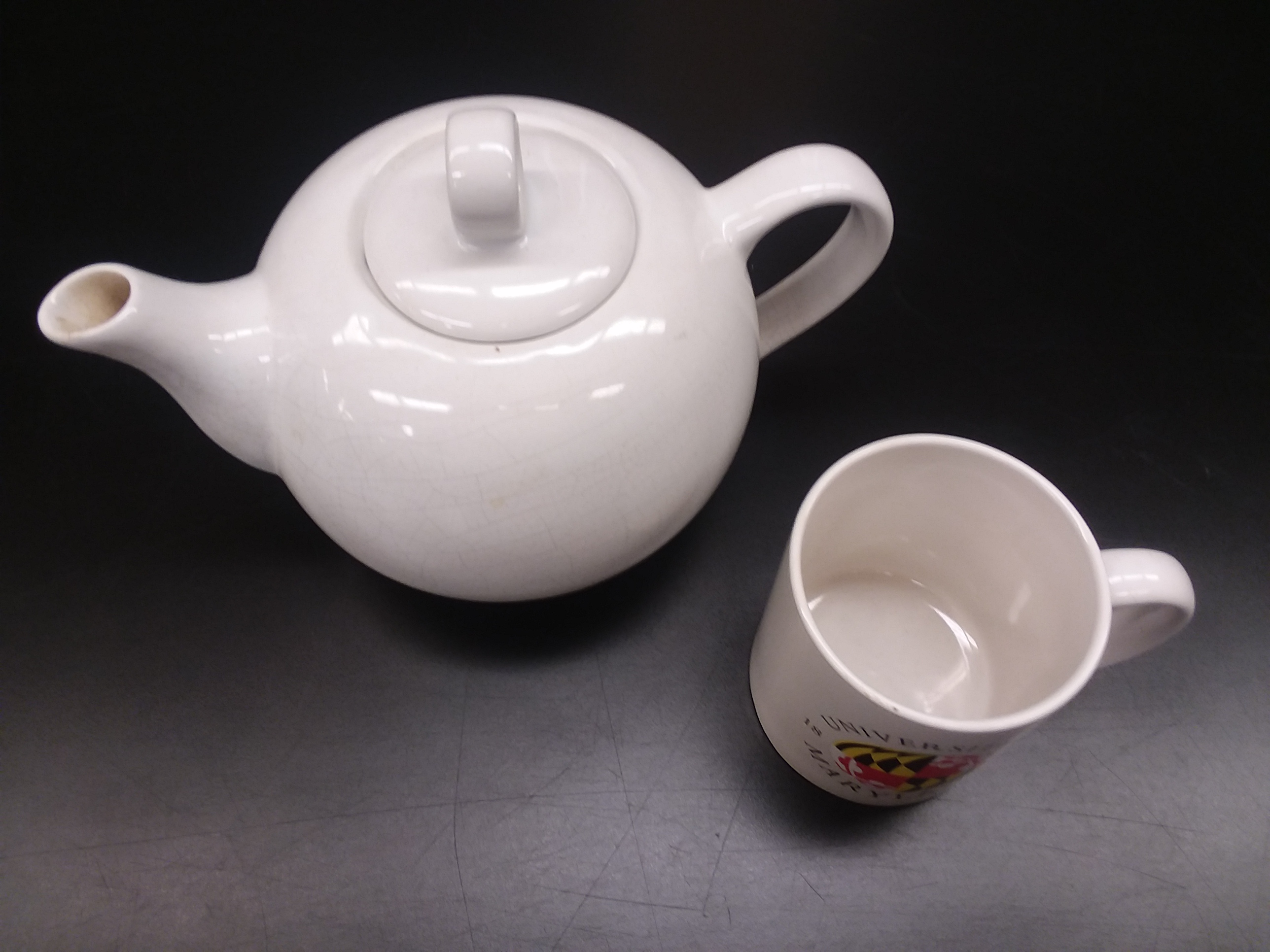 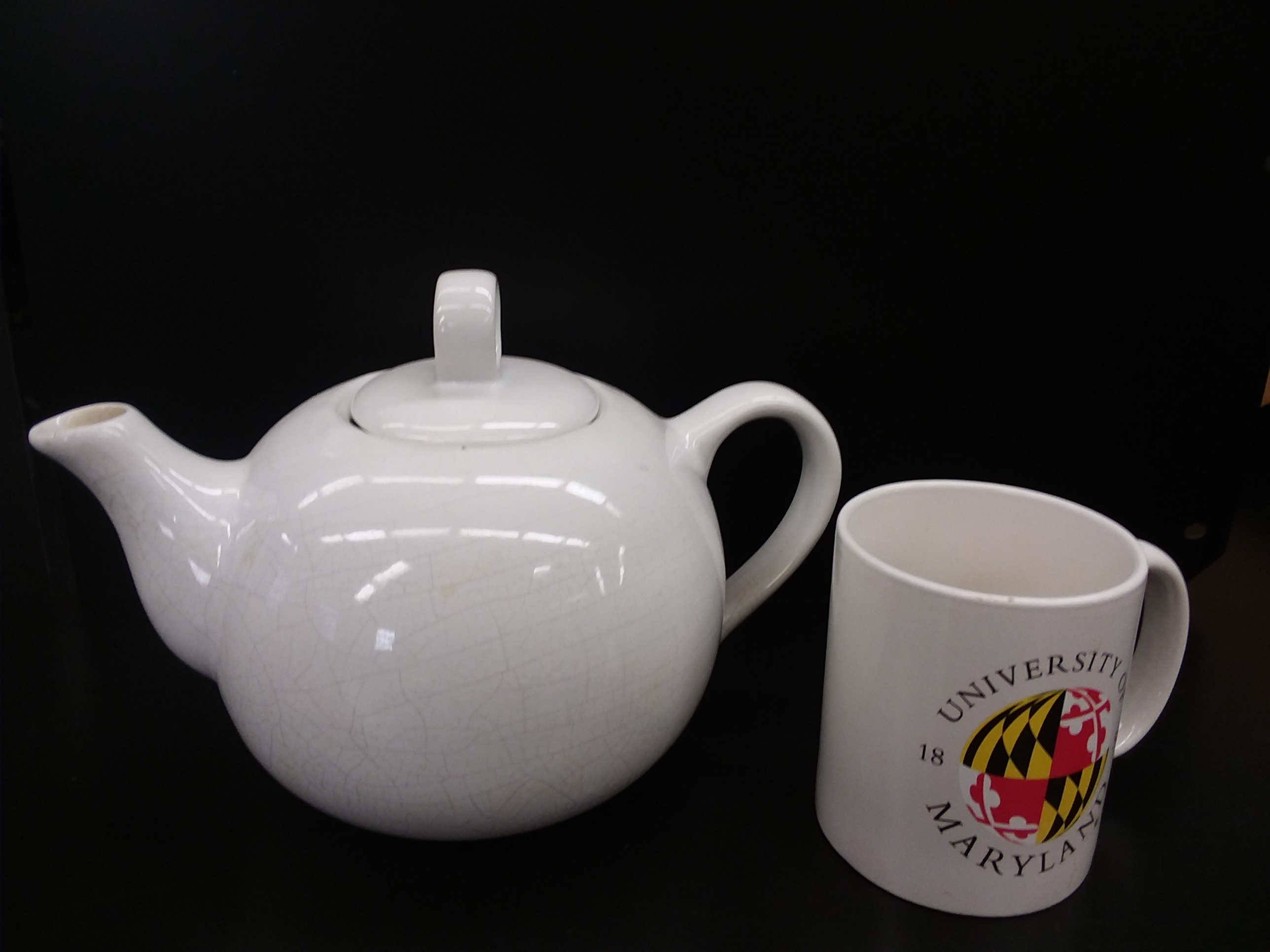 The teapot can even fill this bigger UMD Physics travel mug four times! How? 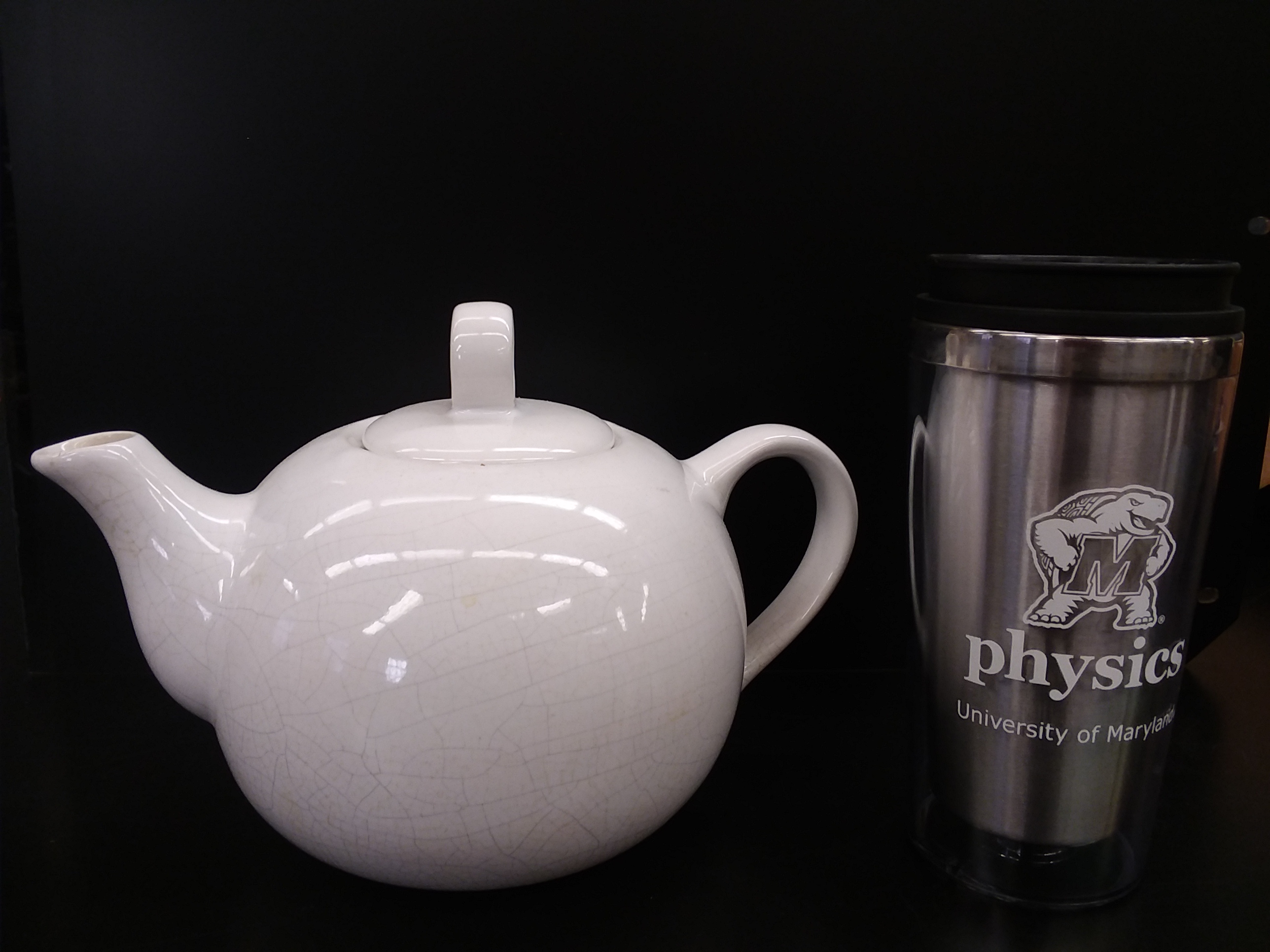 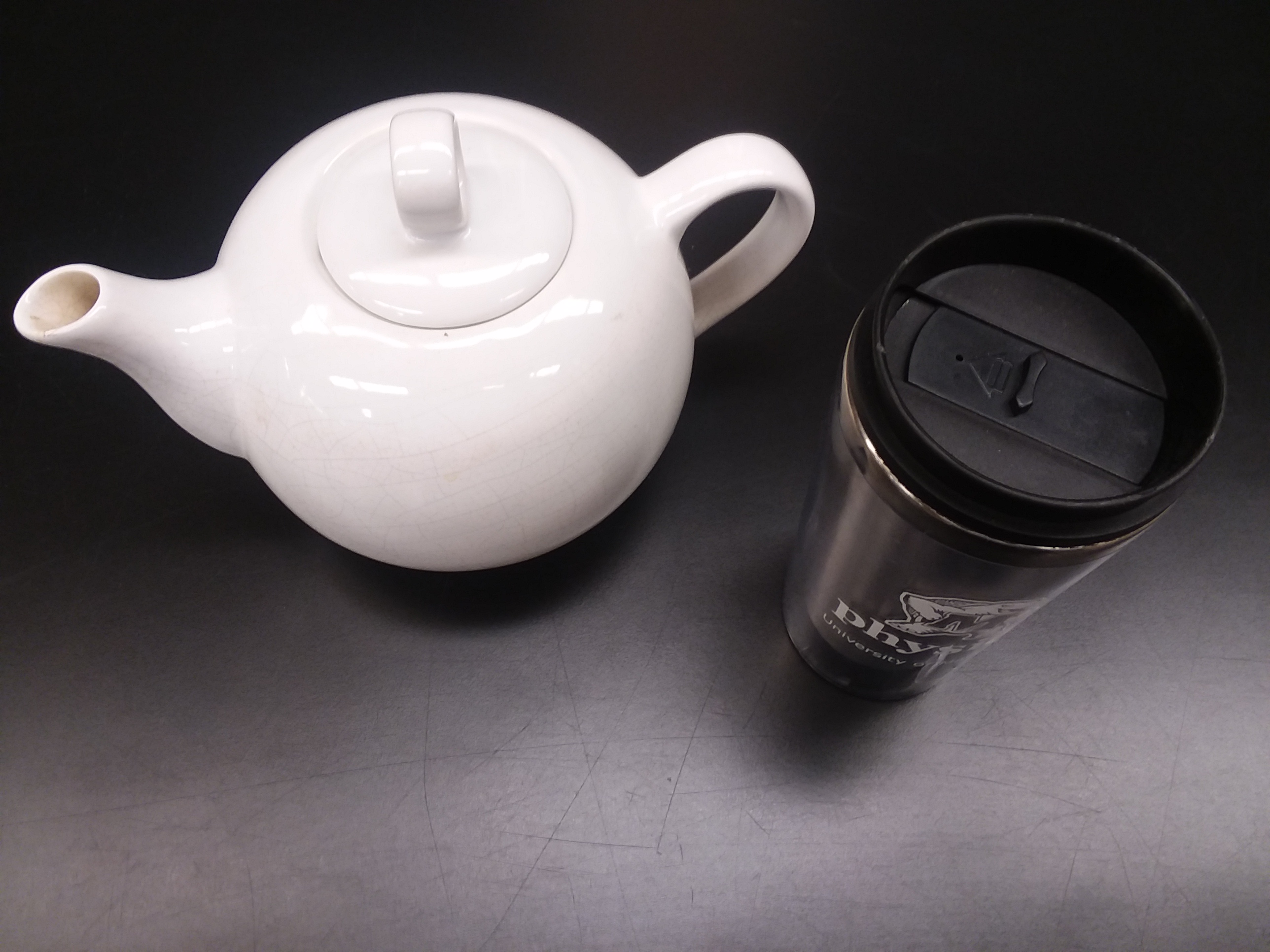 The answer is related to what biologists call the Square-Cube Law. As an object grows in size, its volume increases faster than its surface area. If you take a cubical container and double its length, width, and height, multiplying by 2 in each direction, then its surface area is multiplied by 4, the square of 2. But its volume is multiplied by 8, the cube of 2. The exact numbers will change, though, depending on the shape of the container. Every shape has its own relationship among liner size, area, and volume. As it turns out, the most efficient shape, with the highest ratio of volume to surface, is a sphere.

This sounds like just abstruse math, but it actually explains a lot about things we deal with every day, from teapots and fuel tanks to giraffes and polar bears. (OK, maybe not all of us deal with polar bears every day, but it’s good to know about them anyway.)

Here’s an example from the demonstration collection. This round flask and this tall cylinder each hold the same volume of water, 500 milliliters. The cylinder is much longer and narrower than the sphere, so it looks bigger, but it has the same volume! 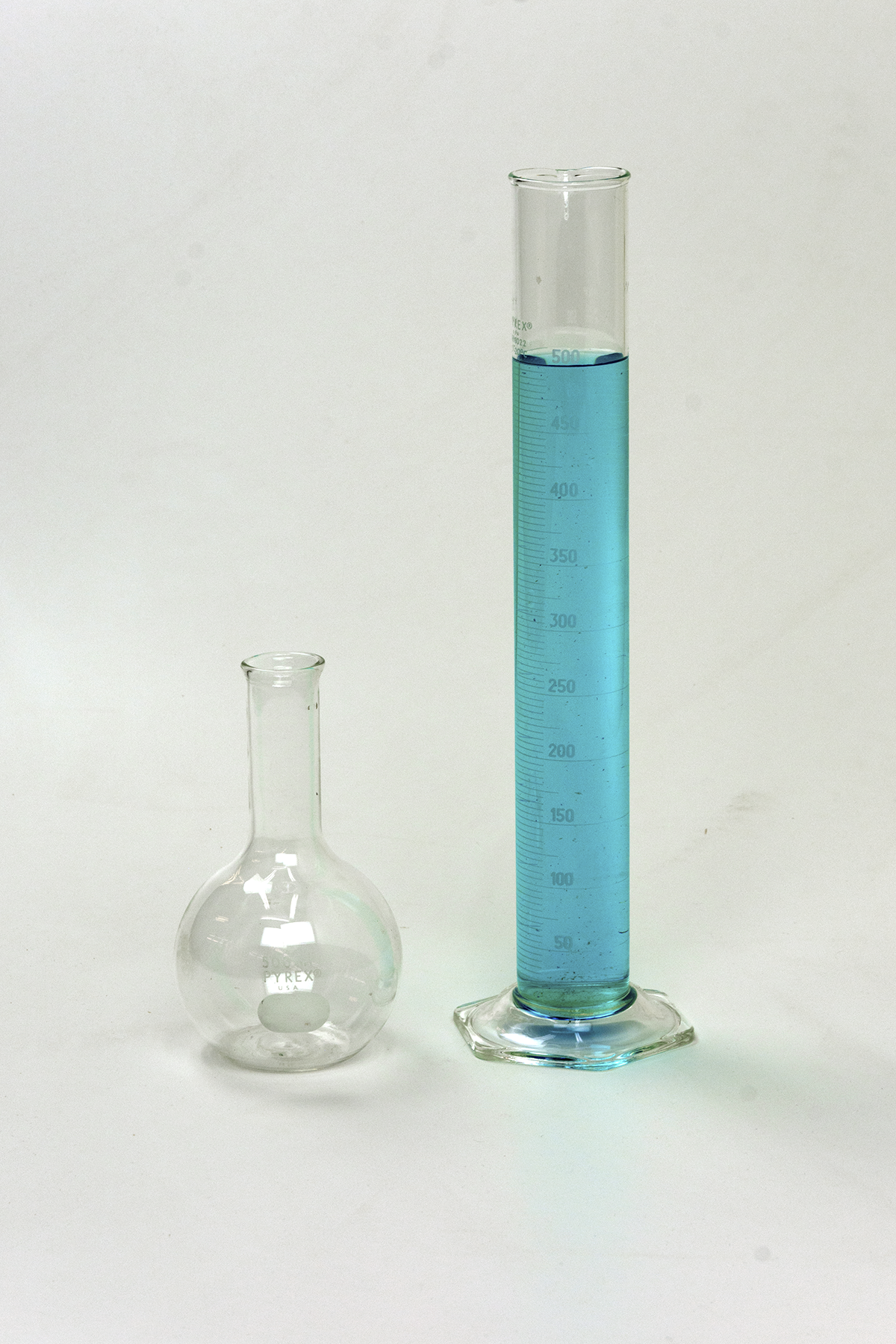 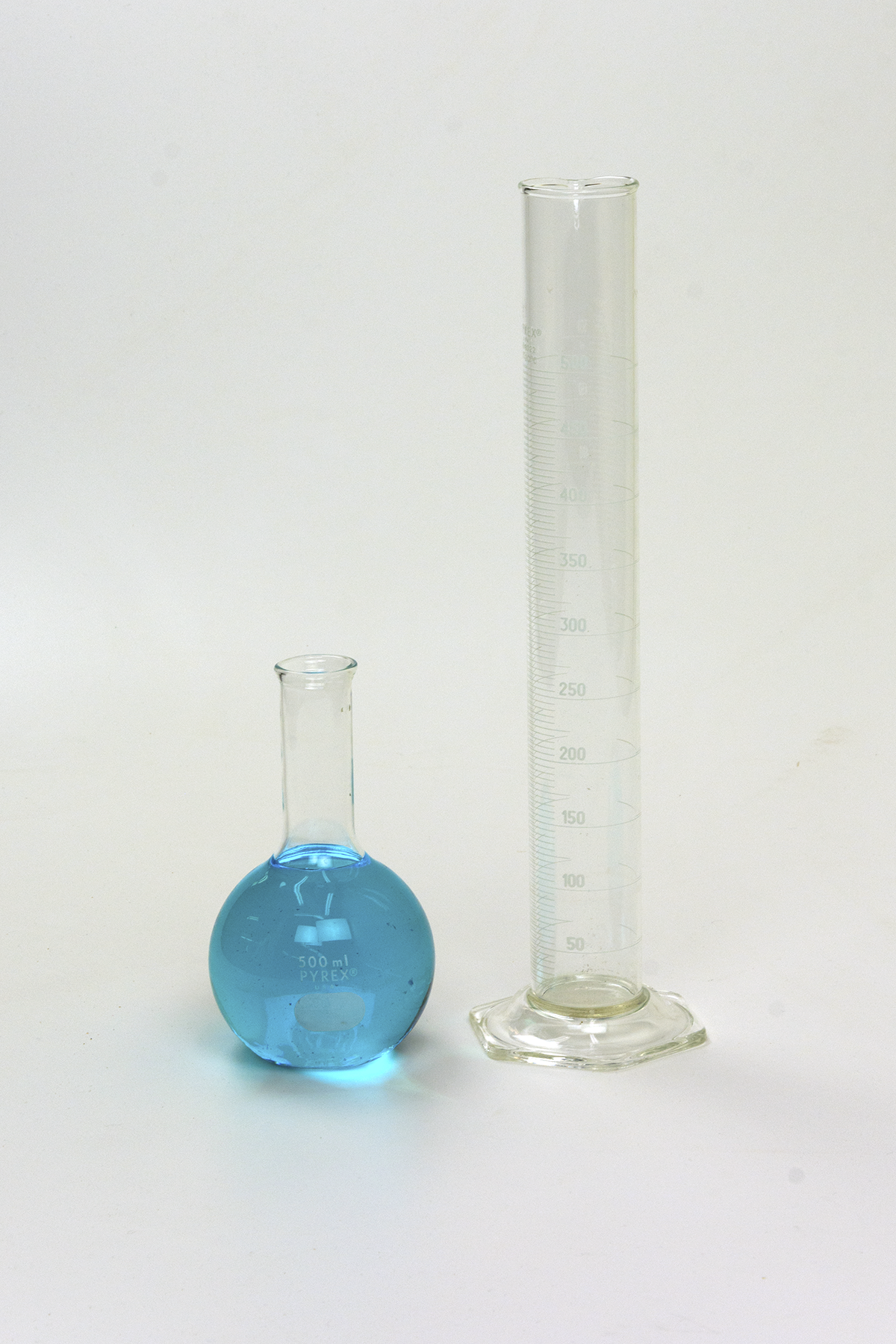 One thing that makes this interesting is that, having a larger surface area, the cylinder is also heavier. It takes more glass to make a 500mL cylinder than to make a 500mL sphere. That might not matter much for our purposes, when we just want one container to sit on the table, but it can make a big difference in large storage containers, or in places where weight is important, like spacecraft.

This is also why fluids in free fall, like raindrops, form into spheres. The surface tension of the liquid is pulling inwards, compressing the surface to the smallest area for that volume of water: a sphere. On a larger scale, this even happens to big accumulations of rock, pulled in by gravity over a long period of time. We call them planets – and luck for us, they do tend to end up round!

That’s all interesting, but isn’t my tea getting cold after all this?

No, and here’s why: The total amount of heat in the container is proportional to its volume. But the radiation of heat away from the container is proportional to its surface area. So my nearly spherical teapot loses heat a lot more slowly than that tall cylinder does. Plus, because there’s less surface area for the same volume, we can make the walls thicker for the same weight, giving it better insulation.

And that’s where the polar bears come in. (Not literally, polar bears should not drink tea.) Ever wonder why so many animals in warm climates evolved long, lanky builds, while arctic animals tend to be rounder? A lot of it comes down to heat. A round polar bear loses heat a lot more slowly, so they can burn fewer calories to stay warm. That can be important in the long winters when there’s not much to eat. In a hot climate where the bigger problem is staying cool, many animals tend to be thinner. Others find other ways to increase their surface area, like the big ears on an elephant, to radiate heat away faster. There are lots of other factors at play in evolution as well, of course, but heat is always an important one.

This relates to why animals only come in certain sizes, too. If you scale up an ant 100 times in each direction, its mass increases by one million - but the surface area of its legs doesn't, so it can't stand up!

So sit back, make a pot of tea, and curl up with a good book about somewhere warmer. And spring will be here before you know it!

(Note: No tea was harmed in the creation of this blog post. But quite a lot of it was consumed.)