Welcome to our new feature: Profiles in Physics @ UMD

We’ll be featuring interviews with people in many roles around the Physics Department and exploring their paths in science.  To open the series, meet Dr. Kate O’Neill, a postdoctoral researcher and biophysicist. Let’s find out how she’s exploring the physics of the human brain, and about her adventures in public outreach. 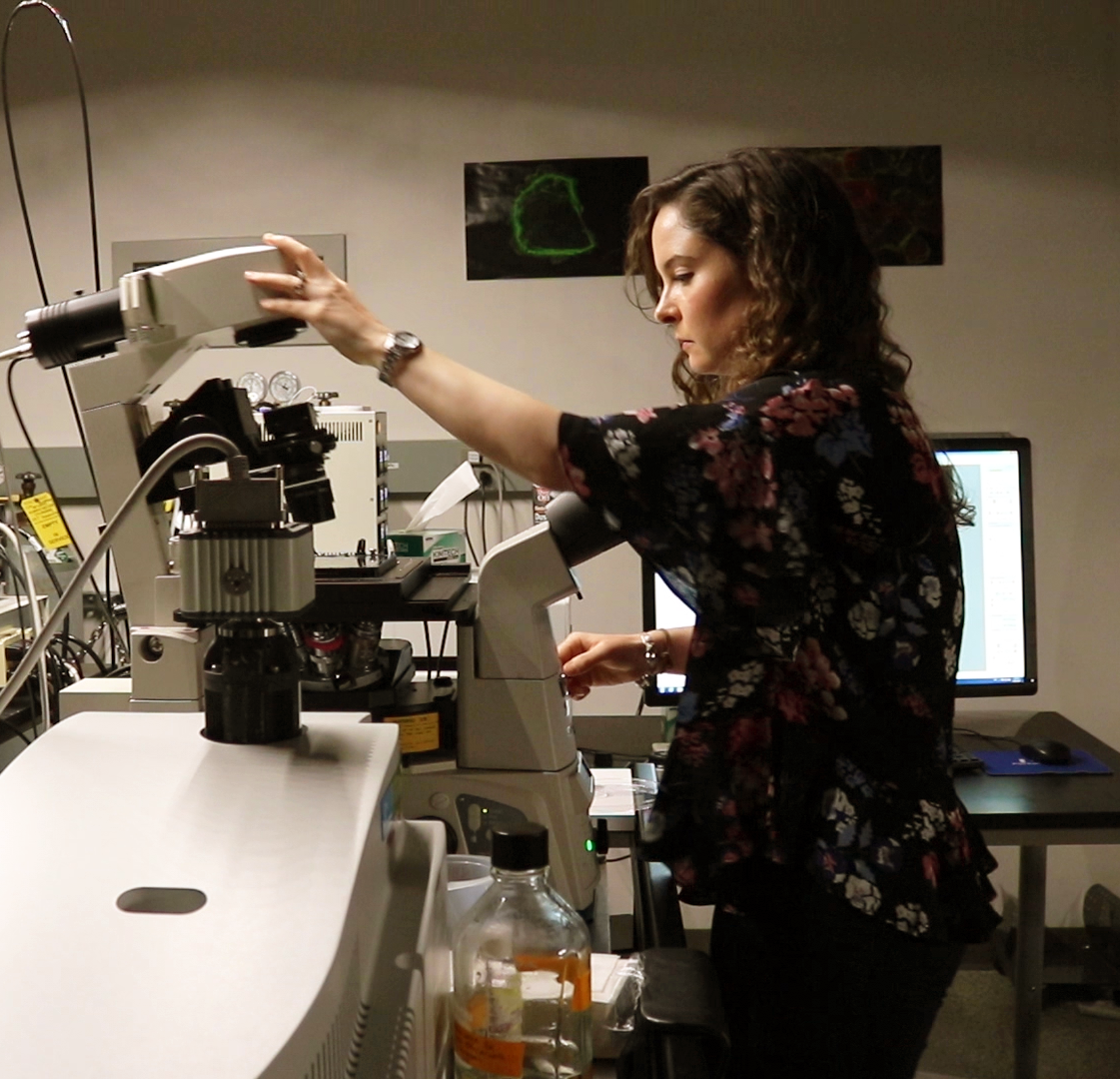 “I am an eclectic mix of an engineer, a neuroscientist, and a biophysicist,” Dr. Kate O’Neill says of herself. And that’s only the beginning!

Dr. O’Neill is a postdoctoral scientist in Prof. Wolfgang Losert’s biophysics lab in the University of Maryland’s Physics Department. Her current research explores the science behind brain structure and function.

A new way to understand how brain cells function

“In the Losert lab, we’re using the quantitative problem-solving approaches from physics to understand problems in biology; and specifically, because of my background, my work focuses on neuroscience. I am trying to understand how the structure of brain cells allows them to function, and how those two things are related.”

“Specifically what we are looking at is the proteins, the molecular machines inside cells. There's a subset of them [called cytoskeletal proteins] that give the cell its shape; and in biology structure is very closely tied to function, they rely on one another. So we are studying how those proteins that give the cell its shape affect its function, and for the neuroscience work I am involved in, we are doing this specifically in brain cells with the ultimate goal of better understanding how brain cells function.”

“Our ultimate goal for the neuroscience work is to establish a new way of understanding brain cell function. Because a lot of previous work has focused on the electrical activity of neurons, the cells that send those electrical impulses across the brain, they have really been the stars of the show. We're trying to take a broader view, by looking at not only neurons, but other brain cells too, and understanding how those proteins that give the cell its shape might be influencing function.”

“This is, I would say, a general theme within neuroscience. Scientists aren't only looking at electrical activity anymore. They're trying to understand metabolic activity; we're looking at the cytoskeletal proteins. The goal is to really illuminate not only brain cell function in general; but what we really want to understand is what happens when things go wrong.”

“I always wanted to do that, to solve problems in biology. And neuroscience always interested me specifically, because my paternal grandmother had Alzheimer's disease. It was starting to really progress in high school, so when I was thinking about what I wanted to do for college I was like, ‘Wow it would be really great if we could make progress in neuroscience research because, you know, her disease is progressing, so clearly we can't stop it, and we clearly don't have a full understanding of how the brain works.’”

Her interest in science started early. “I am an eclectic mix of like an engineer, a neuroscientist, and a biophysicist, and really that stemmed from me pursuing the thing that I was interested in most at the time and not worrying about what it was called.”

“There is a general theme to my interests, and that is that when I was growing up, especially in middle and high school I always liked science and math, I actually really loved math. Then when the STEM subjects got more specialized in high school, I found that I really loved physics too, so it was physics and math I really loved, and that made me consider pursuing engineering in college, which then led to engineering for grad school too. So my bachelor's is in Chemical and Biological Engineering from Princeton and my PhD is in Biomedical Engineering from Rutgers. My goal academically was to get this kind of broad basis of quantitative skills and the problem-solving approaches that engineering teaches so that I could apply these techniques to biologically relevant research questions.”

Solving problems with an interdisciplinary approach

With publications in physics, biology, and engineering journals, Dr. O’Neill’s interdisciplinary approach is certainly paying off in finding connections across disciplines.

“The research that I did in graduate school was actually focused on electrical activity of neurons, and to parse those signals into something that's meaningful, you need to use signal processing techniques. Like you can imagine, there's a lot of steps to get there, from this noisy spiky signal to then distilling the data to parameters that are quantitatively meaningful. And now what I do is image processing. We do a lot of live imaging of brain cells on a microscope: you take images every five seconds for example, and then you try to understand the dynamics of that signal. So in both cases [recorded electrical activity or live cell imaging], you have this incredibly noisy data set, and you have to figure out how to get something meaningful out of it.

Really it's observation by eye a little bit, but then it's iteratively going through the data and processing it, and you find one thing, and then you build off that to something else, but having the quantitative background has helped so much for that in terms of thinking about how to approach trying to understand persistence of a signal or clustering of it. Drawing from my classes in signal and image processing, I can directly use those techniques and those problem-solving approaches to extract information from what might otherwise be very noisy data.”

Outreach and teaching are integral

“I don't know how many other scientists hold this view, but I see outreach and teaching as being as integral to research as the science itself,” Dr. O’Neill says.

“It's for a few reasons.  One is that we need to continue diversifying the academy as much as possible. It needs to be more diverse, more equitable, more inclusive, and one way to do that is to promote interest in young students from all different backgrounds so that they have the resilience to keep pursuing STEM, even when maybe the environment isn't perfect. That's something that I really care about, is reaching those young people. They don't need to be told to be interested in science, they already are. But if they feel like they are encouraged, hopefully they will stick with it even when things get tough.”

“Another reason is I think it's as important to encourage the joy of discovery in the average person. Maybe they're an accountant or maybe they work at a small business, but if they think science is cool, that is better for all of us. Because when the public buys in to scientific research, when they trust science, it makes things better for everyone. It will make those basic science discoveries able to be more easily translated to something else if the public believes in science, is excited about it, is not suspicious of it. Especially because research is often federally funded, research is funded by tax dollars, so I think it's a duty, actually, of ours that everyone [all scientists] should really be engaging in some type of science communication or outreach, to tell the public why what we're doing is valuable and cool and why they [the public] should be excited about it.”

And indeed, here at UMD Dr. O’Neill has been a part of several outreach programs, from Maryland Day to Physics is Phun Show to the Conference for Undergraduate Women in Physics and the Conference for Undergraduate Underrepresented Minorities in Physics. Last year she hosted a unique Physics is Phun program on how space flight affects the human body. 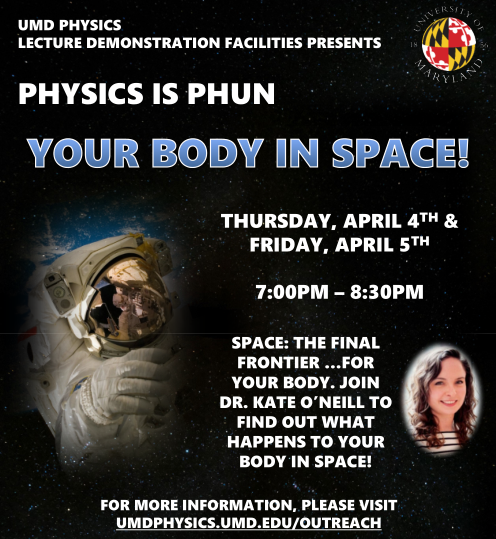 Outreach: From the classroom to Maryland Day

“I started doing science outreach in graduate school… I think science is awesome and I love sharing that with other people,” Dr. O’Neill says.

“The whole process by which research happens can be very mysterious, kind of like a black box. Researchers have an idea and then something comes out the other side, but students don't necessarily know how that happens. So demystifying the scientific process, making it accessible and understandable, is super rewarding for me because you can see in the faces of people. For example when you're talking to them at Maryland Day or at another initiative, they go from asking a question timidly to them understanding the research and asking really amazing questions about it. So that that is something I really love.”

“The initiatives that I got involved in during graduate school tended to focus on mentoring and outreach; and an experience that I especially loved was volunteering at New Brunswick High School, which is the local high school to Rutgers, where I went to graduate school. I volunteered in a physics classroom for five academic years; I would go every other week and help with lessons, and really just bond with the students. And then at the end of the year, if we could organize a trip to Rutgers for them to visit the lab, we would, but at the very least I would give a presentation about my research and try to demystify it for them and also inform them of how they could get into science. Because everyone knows that college is expensive, but to tell them, “okay you can go to community college first and then finish at a four-year college. And then guess what? A PhD is fully funded!” That really blows their mind because they understandably had no idea that you could get paid to go to school. So that really solidified how important that work was to me.”

“I really love being in the physics department at UMD… Physics is Phun, that's a really amazing initiative for the community surrounding UMD, because there's a topical lecture with demonstrations that gets everyone from, I'd say, elementary school students through their parents involved. Seeing them come in because they're interested, say about space, and then they're leaving understanding what astronauts go through when they're in space, it's super.”

And her outreach work doesn’t stop at the edge of campus. “Another outreach initiative that I got involved in as a postdoc is called Skype a Scientist. You sign up as a scientist, you categorize yourself – so I say I'm a neuroscientist, physicist, and engineer – and then you get matched with teachers across the U.S. I've Skyped with classrooms ranging from second grade to 12th grade and tell them about the research that I'm doing and allow them to ask questions about what it's like to be a scientist.”

“Being able to reach more people, even before the pandemic this [Skype a Scientist] is something that was done virtually, it's just really, really awesome. And I think it's important to do because even if those kids I talk to grow up to be something completely different -- an artist, a politician, someone who does not do science every day -- they'll think science is cool and worthwhile.”