This week we’re taking a look at demonstration E1-11, our model potential well. This fibreglass model was designed to let us simulate the motion of bodies in an inverse square potential, such as the gravitational potential around a massive object in space. 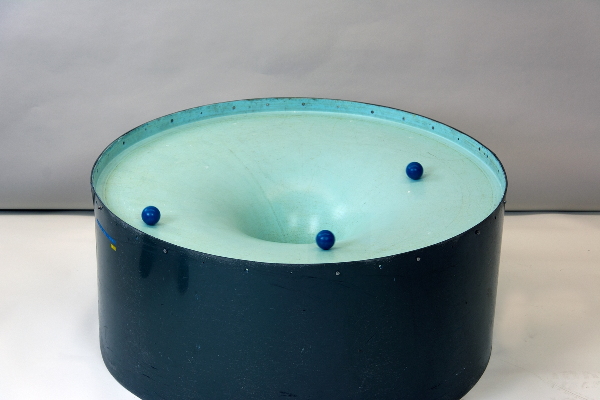 You can see the demonstration presented in this new video starring Liz Friedman.

A potential well is an area where potential energy is locally at a minimum. That is, when an object reaches the center of this well, it cannot gain additional kinetic energy to leave. Here, we have made a model of the potential well around a dense object. The curve of the fiberglass surface represents the increasing force as your approach the center.

When you roll the ball across the surface, you use some initial force to start it moving. Once it is rolling on its own, though, the only forces acting on it are the force of gravity, pulling downwards, and the normal force and frictional force of the surface supporting it. So the ball accelerates as it rolls down the surface, exchanging potential energy for kinetic energy, until it either falls into the hole or it has enough kinetic energy to escape the potential well entirely.

The ball can follow many different paths within the potential well, all determined by its initial velocity vector – how fast it is moving to start with, and in what direction. Watch for that in the video! 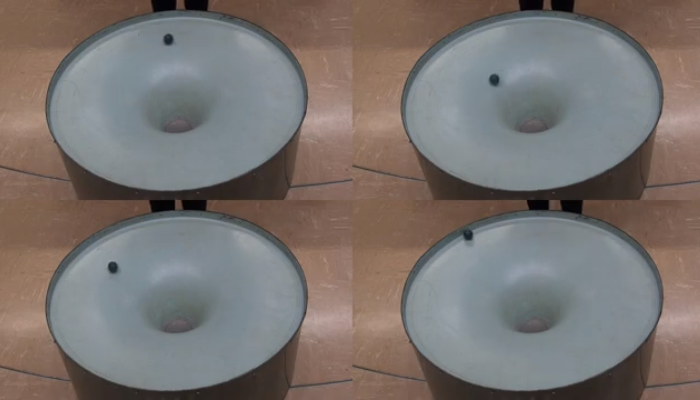