This week marks the anniversary of the official discovery of the planet Neptune. 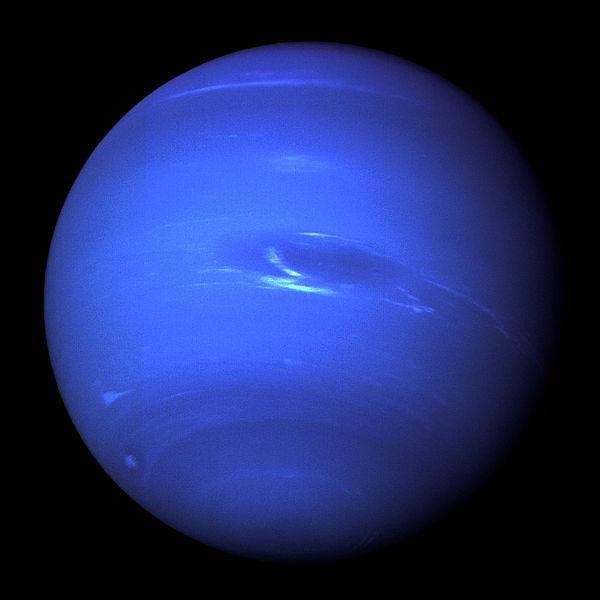 Neptune’s existence had predicted mathematically before it was observed; but it was finally seen via telescope, at last, on Sept 23-24 1846 by Johann Galle and Heinrich d’Arrest, making it the first planet to be predicted via the laws of physics before it could be identified in the sky.

Earlier measurements of the orbit of Uranus had detected some irregularities in its orbit. By extrapolating from Kepler’s and Newton’s laws about gravitation and motion, it could be established that some additional mass was generating a force on Uranus; one possibility was that this was another, more distant planet. Two different scientists, Urbain Le Verrier and John Couch Adams, both calculated the existence of this planet and made predictions about its position in the sky.

Using Le Verrier’s calculations, Galle and his assistant d’Arrest were able to locate an object in the sky via the telescope of the Berliner Sternwarte, the Berlin Observatory, in the position predicted by Le Verrier. Tracking it, they established that it was indeed a planet following the predicted orbit. For the first time, rather than just logging observations and building predictions based on them, scientists had succeeded in predicting a planet mathematically and then locating it where theory predicted it to be.

This is part of how theory helps us understand what we see, as well as predicting where to look. In retrospect, it was discovered that Neptune had been sighted before, bu Galileo, Herschel, and others – but nobody ever determined for certain that what they were seeing was a planet. Other observers, working both from Adams’ calculations and Le Verrier’s, were searching for the planet as well, but did not find it – or found it but did not realize they had!

This is the essence of the physical sciences – we use mathematical tools to make predictions about the world, and use experiments and observations to confirm or disprove those predictions, and to understand what we observe. We carefully organize our data, and report on our work to our collaborators and peers. Then we use what we learned to refine our theories, making better tools for further experiments and predictions. All of physics builds on these basic principles, whether you’re making a prediction in a first-year physics class about the motion of a ball on a track, or calculating where to point a telescope to discover a new part of the universe, we are all doing science.

[a page from Galileo's notes, with a possible observation of the planet Neptune, never confirmed]

Read more about Neptune and its discovery