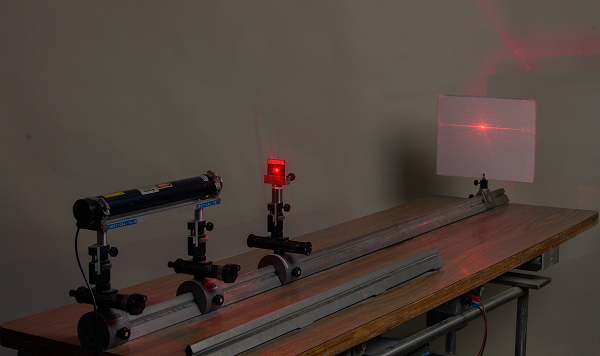 One popular demonstration in our collection for introducing concepts of wave optics is M1-11: Laser Interference: Fixed Double Slits.

Collimated light waves come from the laser and pass through a pair of narrow slits in the slide; the light passes through and then projects on the distant screen. But light travels as an electromagnetic wave, so when the light comes out of the two slits, it forms two wavefronts, just like ripples from two stones dropped in a pond. These two wavefronts can interfere with each other, as we can model with this pair of overlapping concentric circles. Where two peaks or two valleys of the wave pattern line up, they add together, interfering constructively; when a peak and a valley overlap, they cancel out, interfering destructively. The same happens with light waves; the light from the two slits overlaps, and creates a pattern of bright spots (constructive interference) and dark spots (destructive interference).

When using this in class, we can adjust the slide to use different sets of slits, with different slit widths and different spacing between the slits. This is a good opportunity to challenge students to predict how changing these two variables will change the resulting interference pattern.

Likewise, if you increase the wavelength, the space between the peaks of the waves gets larger, so it’s not a surprise that the spaces between their overlaps would get bigger, too. The effect of the slit spacing, though, takes a moment to think about. If the slits move closer together, the two wavefronts are more and more similar; so the differences between them, the points where they fully cancel out, are farther apart. So increasing the slit spacing decreases the spacing of the fringes, and decreasing the slit spacing increases the spacing of the fringes.

We can see this modeled in a ripple tank simulation here in the Physlet Physics collection at AAPT’s compadre.org: https://www.compadre.org/Physlets/optics/prob37_7.cfm Use your mouse to measure the positions of the peaks relative to the double slit at the base of the image.

Use the button on the right of the simulation screen to activate the double slit barrier. You will then be able to simulate precisely this experiment! 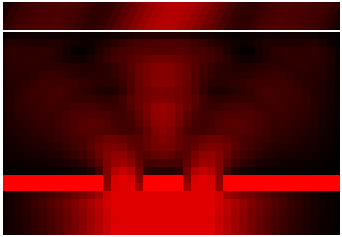 Light of a particular frequency is released from a source, passes through a double slit, and then is projected on a virtual “screen.” So you can see both the interference pattern as it is formed through space, and the final pattern that you can detect at a distance.

Carrying out the computations for this simulation is processor intensive, so it may run slowly; and as you can see in the image, the resolution is limited. There are limits to how well software can simulate reality!

But at the same time, we can use the simulator to try things we can’t easily do in the laboratory. The slider at the bottom will let you change the laser’s frequency, variable along the full visible spectrum and a bit beyond (fun challenge: is there anything remarkable about the spectrum selection here?).

So here we can see the value of combining both real-world experiments and simulations – each alone is useful in learning, and each has its benefits and limitations, but the combination lets us see things we cannot with either one or the other on its own.