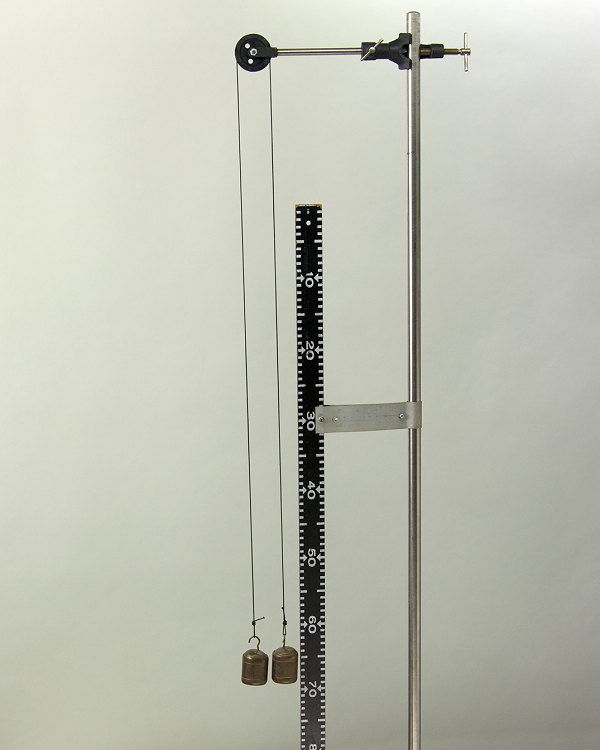 Atwood’s Machine is a device initially developed by George Atwood in the 18th century as a way of testing Newton’s Laws mechanically. We have a three demonstrations of this device, C4-21: Atwood Machine, C4-22: Horizontal Atwood Machine, and C4-23: Atwood Machine with Heavy Pulley which can be used in the classroom to measure the acceleration of masses under gravity.

At its simplest, Atwood’s Machine is a pulley with a string over it, with an object hanging on each end of the string, pulled down by gravity. According to Newton’s Laws, the force on each end of the string is dependent on the mass. In Atwood’s idealized, theoretical mathematical model of the experiment, the pulley and string themselves have no mass, so only the hanging objects’ mass we add affects the force.

So long as the masses are equal, there is the same force pulling down on each object – so there is no net force on the system. So if the two objects start out stationary, they remain stationary, by the principle of inertia. If they start out moving, they continue moving at the same speed (until they run out of string).

You can also use this device another way – by timing how fast the objects accelerate, if you know their masses, then you can measure the force of gravity!

For one version of this demonstration (figure 1 above), we carefully chose a pulley with a very low mass, so it behaves very much like the theory predicts.

For the other (figure 2 below), we have a much heavier pulley. It has greater mass, and thus accelerating the hanging objects also means overcoming the pulley’s inertia as well. 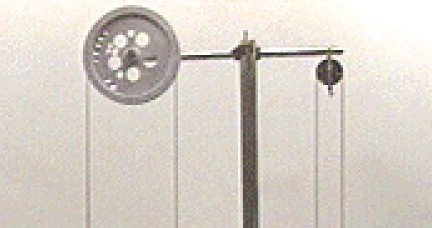 This is an important aspect of the difference between theory, simulation, and experiment, and valuable to talk about in class. In a theoretical model, we can propose things that don’t really exist in the real world – massless strings, frictionless pulleys, objects of constant mass but zero size. We use these theoretical experiments to test out theories mathematically, to see if our theories will give results that make sense, and to plan an experiment.

With a real experiment, there are more variables we have to take into account that can affect the results – friction, inertia, heat, objects that stretch and swing and wear down over time. But it’ is these real-world experiments that let us take that final step and ensure that our theories accurately predict the outcome of real-world physics.

A simulation is somewhere in between the two. We can simulate a physics experiment inside a computer, as another way of testing our theories. This has its own limitations, since the computer only knows about the laws of physics we program into it – if our initial assumptions are wrong or if we set them up incorrectly, the simulation may give inaccurate results. But the simulation lets us try out many combinations of factors in succession, making tiny changes each time, in ways we might not be able to in the laboratory. It’s much faster to adjust a measurement in a simulation than it is to build a new device on the workbench.

And, importantly, we can use a simulation to practice an experiment when we can’t get to the laboratory at all!

This simulation, by Andrew Duffy of Boston University, lets us try out the Atwood Machine at home on our computers, or on the screen in the classroom http://physics.bu.edu/~duffy/HTML5/Atwoods_machine.html

We can vary the mass of each of the two hanging objects, from 0.1 kilograms (100 grams, about the mass of a small bar of soap) to 2 kilograms (2,000 grams, close to the mass of a 5-pound bag of flour). You can set the masses and then start the simulation running, and it will measure the forces and acceleration as it runs. Try it out and see if you can replicate our demonstration, then experiment and test its limits!