The Tablecloth, the Coin, and Other Adventures with Inertia

We’ve all seen this classic stage magic trick: You arrange a nice table setting, with plate and cup and silverware and maybe a nice vase of flowers, on a pretty silk tablecloth. Then you yank the tablecloth out from underneath, but the dishes all stay on the table! We even have a video clip of it here. 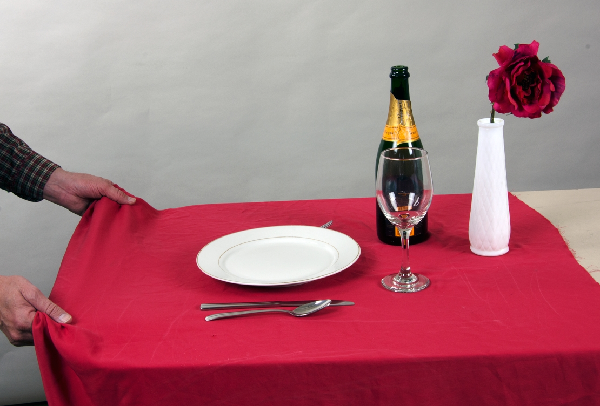 Newton’s First Law of Motion states that an object’s velocity is constant unless there is a net force acting on it. What this means is that if an object is not moving (at rest), it will not start moving until there is a force pushing or pulling on it. If an object is moving at a constant speed and direction, it will keep going with that same speed and direction unless a force pushes or pulls on it to change that. An object’s inertia is its resistance to changing its velocity, e.g. how difficult it is to start it moving from rest.

So that’s what’s going on here. We are applying a force to the tablecloth, pulling it away. But so long as we have a smooth, unwrinkled tablecloth, we’re not applying any force to the dishes, just the cloth. So the cloth moves away quickly, but the dishes stay where they were. This is a very popular way of demonstrating inertia, and you can find it on our website.

The dishes do have a force pulling straight down on them, of course – the force of gravity. They aren’t actually moving downwards because they can’t go through the table. Technically, the table and tablecloth exert an upward force on the dishes, which is formally called the normal force (“Normal” here is using an archaic definition that means “perpendicular to the plane,” not what we usually mean by normal). The normal force here is equal and opposite to the force of gravity, counterbalancing it and canceling it out, so the dishes don’t move. When the tablecloth goes away, the dishes are for a moment not touching anything, so gravity does pull them down a very short distance, the thickness of the tablecloth, and they hit the table with a clatter. But the point is that they don’t follow the tablecloth off the table.

But there can be some more complex issues at work here. Why does it matter that the tablecloth is smooth and unwrinkled? Why do you have to pull quickly on the tablecloth, and not slowly? Why do we sometimes see this trick fail, and end up with the dishes all breaking on the floor? (Please don’t do that.) Perhaps the physics is more subtle than it first appears.

One issue to consider is that force and acceleration are vector quantities; they have a magnitude and a direction. Remember the note above that the “normal” force from the table is called that because it’s perpendicular? That matters here. Newton’s law says that the object is at rest stays at rest until acted upon by a force. That force will then give the object an acceleration in a particular direction. The force we’re putting on the tablecloth is a contact force – we pull on the tablecloth, and it experiences a force in the direction we pull. The tablecloth and table are pushing straight up with a normal force so long as the dishes are touching them. Gravity is different – gravity acts at a distance, and pulls down on things regardless of whether or not they’re touching something.

But there’s something else in play here, that makes this complicated: Friction. Specifically, contact friction. This is a force that acts between two object that are touching each other. As we’re pulling the tablecloth past the plate, there is a frictional force between the bottom surface of the plate and the top surface of the tablecloth. How large this force is is partially dependent on the properties of the surfaces and how they interact, what we call the coefficient of friction. This is essentially a way of measuring how rough or smooth the junction between two things is. So using a smooth silk or rayon tablecloth will give a very low coefficient of friction, while a rough wool or linen tablecloth might result a higher one, and thus exert more sideways frictional force on the dishes. If this frictional force is too high, it might be enough to overcome the inertia of the dishes, and drag them along.

Let’s look at a simpler demonstration in our collection, with fewer variables to worry about. Demonstration C3-01 is quite simple: A small steel sphere rests on a stiff piece of plastic, which is resting on a steel stand. Attached to the stand is a spring that you can pull back and release so that it hits the plastic. When it does, the plastic flies out from underneath the sphere, and the sphere drops down and rests on the stand, right below where it was before. 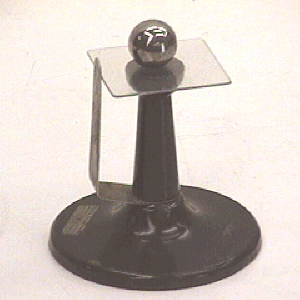 This demonstration can be valuable in the classroom if you want something a little easier to use than the tablecloth. And it’s also a bit more portable. And, crucially, you can try this at home with materials you probably ready have!

Put a cup or glass on the table, with a playing card on top of it. The card can be from a regular deck of cards, or Yi-gi-oh or Pokemon, or a baseball card or a card from a boardgame, or whatever else is handy; it just needs to be a nice stiff card. Now, get a coin and put it on top of the card, so that the card is holding it above the mouth of the cup. 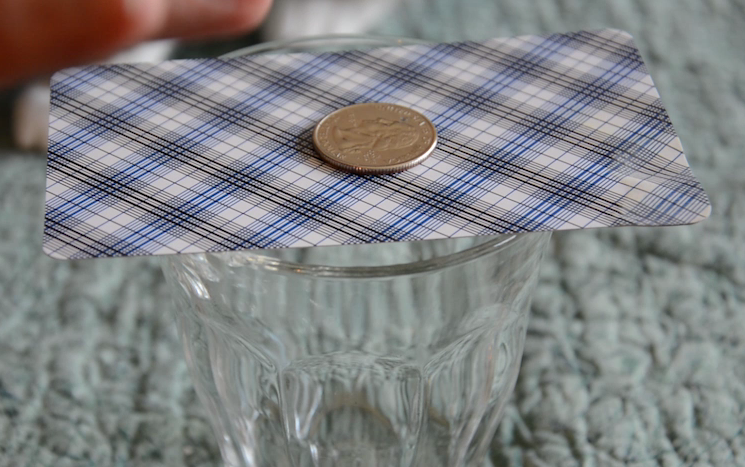 Now, flick the edge of the card with your finger, quickly and firmly, as seen in this video. You may need to practice this a few times, but once you get the hang of it, the card should fly straight out from under the coin and flutter to the table or the floor. And the coin drops straight down into the cup, just like the steel sphere, and just like the dishes on the table!

Watch for more secrets of the physics behind these demonstrations in Part 2 of this series, coming soon!