The Pencil and Plywood demonstration is one of our most popular and dramatic illustrations of the principles of mechanics. We’ve all seeing experiments with collisions, but this one has some surprising results.

In this demonstration, we have a long brass tube, and at the end is a chamber with a vise. We put a small piece of plywood in the vise. Then we put a pencil in the far end of the brass tube, and attach a fire extinguisher to it. When we release gas from the fire extinguisher, the force from the gas rapidly accelerates the pencil down the tube. The pencil flies through the tube at high speed, comes out the open end, and slams into the plywood. 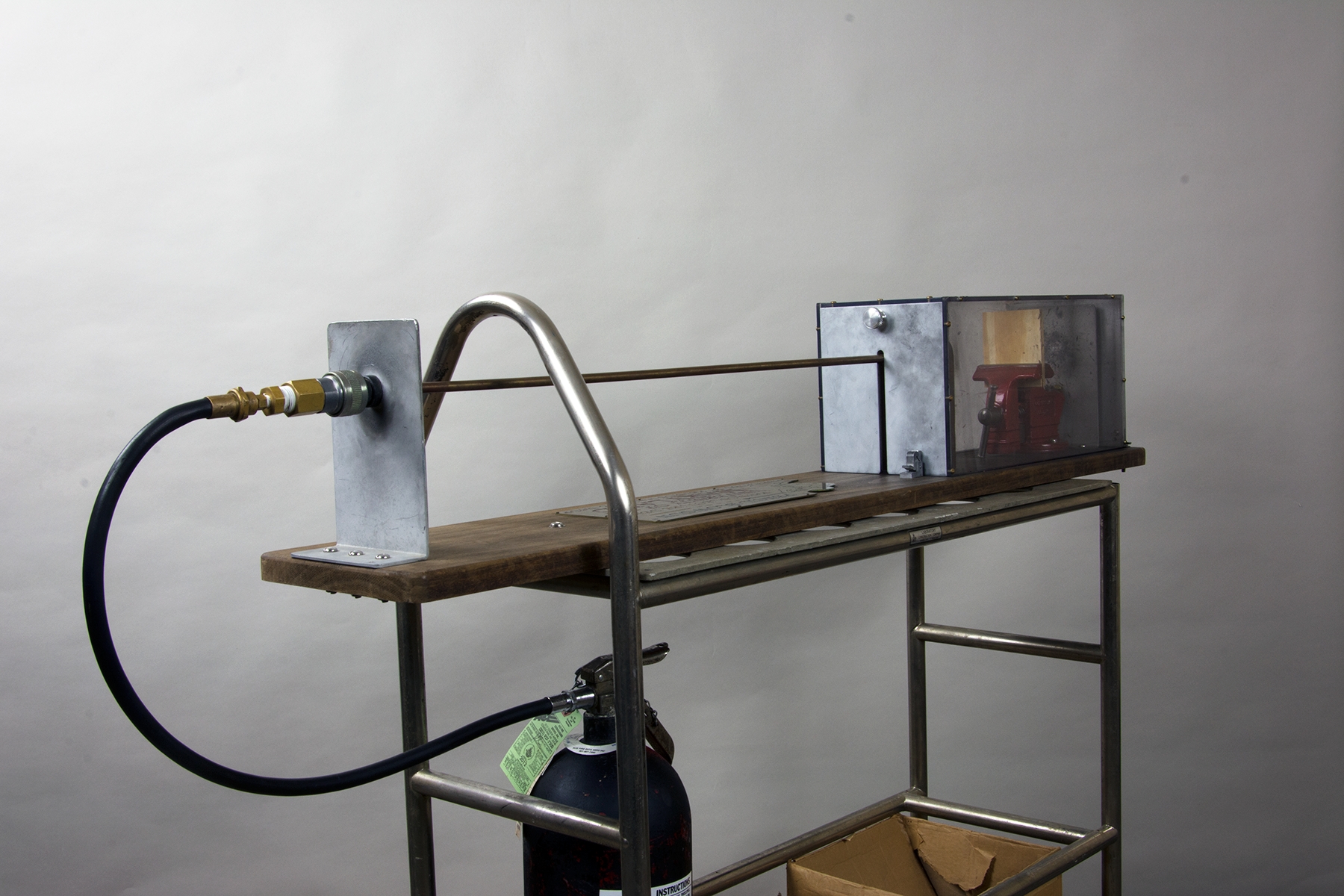 When the pencil strikes the plywood, by Newton’s principal of inertia, it tends to keep moving unless an outside force (from the plywood) changes that motion. It’s moving very fast, though, and by the time the plywood has exerted enough force to stop it, the pencil has blasted partway through the wood! This is an exciting way to illustrate forces and inertia, though some have pointed out that it’s also a waste of a perfectly good #3 pencil.

Today, we’re going to take a closer look at the action, with some measurements you can make at home to complete the experiment.

If you click here, you can see a close-up film of the collision in slow motion.

Velocity is how fast something moves in a given direction. In this case, everything’s moving in a straight line, so we can find out the velocity by just measuring how far the pencil travels (the distance from the end of the tube to the plywood) and dividing that number by how long it takes to get there. If The distance were ten centimeters (it isn’t) and the pencil took two sixhundredths of a second (two frames of the video) to cross that distance, then the velocity would be (10 cm)/(2/600 sec), or about 3000 centimeters per second! (Of course it isn’t, because those aren’t the real measurements. You need to do those yourself!)

Now, obviously the easy way to know that distance would be to go measure it. But we’re all at home, not in the classroom! But you can estimate the distance be measuring other things. If you have wooden pencils of your own at home, you could measure their length and width, then compare that to the length and width of the pencil on the screen. If you don’t perhaps you can research pencils online and find out how long, wide, and heavy they usually are. Or you could measure how thick the wood is, look up online some of the widths plywood comes in, and use that to estimate how far apart things are. None of these will tell you exactly how big the pencil in the movie is, but you can make an estimate, and educated guess, of how big it is, and from that calculate an estimated velocity.

For advanced students, here’s a second challenge: If you have pencils around the house: weigh some pencils. Pencils are pretty light, and not all the same, but you can again get a good estimate of the mass of a pencil by measuring the mass of a group of several pencils, and dividing by how many pencils you have; this gives you their average mass. Again, if you don’t have the same kind of pencils at home, or a scale, you can do some research online and find out about them. Perhaps people who sell and ship pencils can tell you how many are in a box and how much the box weighs?

And the final question of the day: Would you want to do all this math by hand using a pencil that’s sticking through a piece of plywood?