Ready for a fun kinematics experiment you can experience and learn about from the comfort of home?

Demonstration C2-11: The Racing Balls is one of our most popular kinematics demonstrations, as it presents an interesting conundrum. 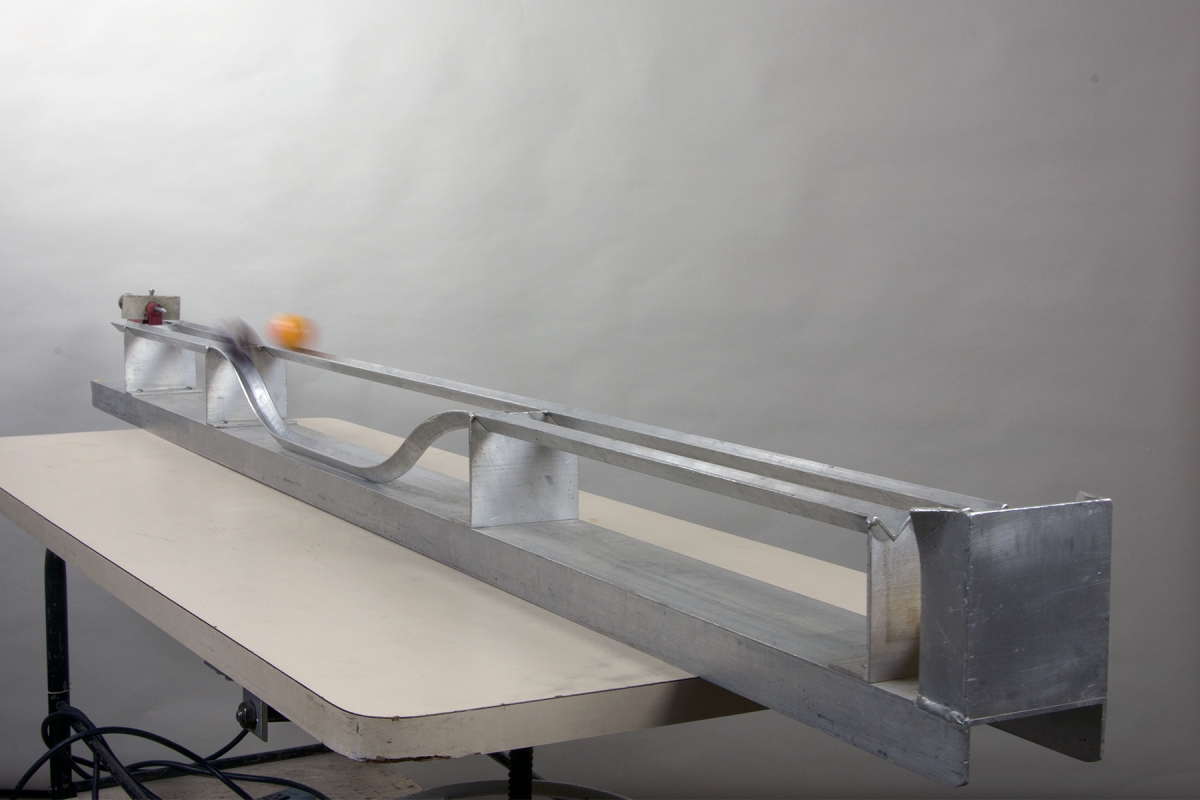 We have two long tracks, on which a pair of equal-mass billiard balls can roll with very little friction. At one end is a spring-loaded launcher that can send the balls rolling down the tracks with the same initial speed. One of the tracks remains straight and level all the way to the end. The other slopes down to a lower height, runs level at that height for a short distance, then slopes back up to the original level again.

Think about this for a while before you scroll down to see what happens.

Here’s what happens: When we release the spring, the balls start forward with the same speed. The ball on the rear track, which is straight, travels with this same speed the entire length of the track, until it reaches the end.

But when the ball on the bending track reaches the downward slope, it increases in speed as it goes downhill, as we see in this short video.

While that ball rolls along the flat lower section of track, it does so with this greater speed. So it covers this distance in less time than the ball on the higher track does. When the ball on the bent track rolls back uphill, it slows down to its original speed. Now this ball has undergone two periods of acceleration: a positive acceleration as it gained speed, and a negative acceleration as it lost that speed again. Let’s see that in slow motion in this video clip.

So the two balls both have the same speed again when they reach the end of the track. But they don’t get there at the same time; the ball from the bent track gets there first!

The ball on the bent track had a higher speed for a short time, while it was on the lowered section of track. This means that when you take the entire trip into account, that ball had a higher average speed, even though its initial and final speeds were the same.

For further discussion, consider other ways you could analyze this problem. Can you separate out the force vectors acting on each ball? Can you calculate the energy of the system? Will this help predict the result, or not? This is an important question to look at when studying any problem – deciding which variables matter and need to be measured in order to predict the outcome.