UMD Faculty: Are you interested in showing wave phenomena in class, but unsure if the familiar lecture-hall sized Shive Wave Machine and Ripple Tank will fit in your seminar or discussion room? Here’s another demonstration you may want to check out! 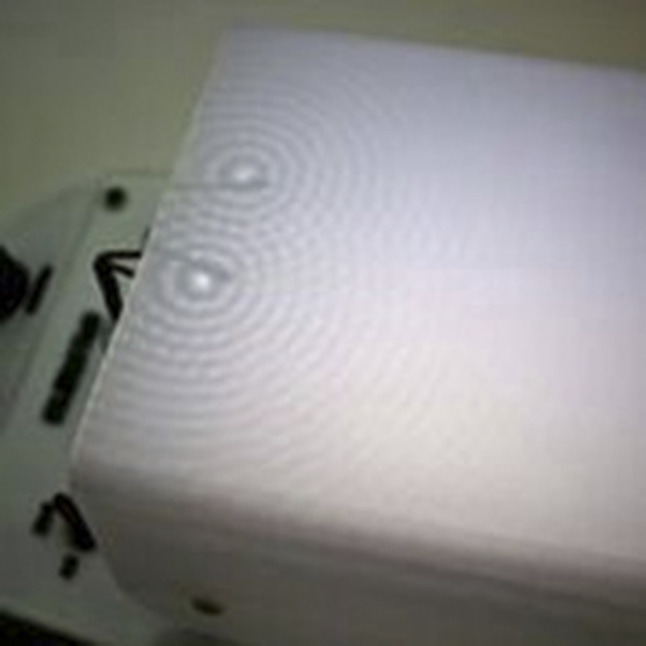 The new portable ripple tank is a small desktop-sized device we use in our physics classes here at the University of Maryland that produces waves in a small tabletop tank. It can be used hands-on for small groups to gather around in the classroom, or displayed on screen with a digital camera for larger audiences.

We fill a small tank with water, and illuminate it with the built-in LED strobe. A small stepper motor drives vibrating needles at the edge of the tank, generating ripple patterns that propagate through the tank. The strobe rate is adjustable, allowing you to seemingly slow down or freeze the movement of the waves to highlight particular interference effects, or you can switch it over to steady illumination to show wave propagation in real time.

Challenge your students to predict how the interference patterns will change as you vary the vibration rate!

A valuable trait of waves is that many of the properties of wave phenomena are the same for all waves, in any medium. Just like these waves of moving water, other waves light sound waves, radio, and light propagate through space, and can interfere and form interference patterns. The Ripple Tank is a good way to introduce these concepts in class in a familiar form, and analogues can then be drawn to how these effects appear in other situations. The way waves of water diffract around a barrier is much like the way sound waves diffract around a sound-baffling wall by the highway; the calm spots formed by two out of phase sources interfering are much like the quiet zone formed by noise-cancelling headphones as they repeat a soundwave with its phase inverted to remove background noise.

Try out a demo sometime and explore the word of wave physics. But don't get seasick!