The Coyote Should Have Studied Physics: An Experiment With The Fan Cart - Question of the Week 3/2 - 3/6 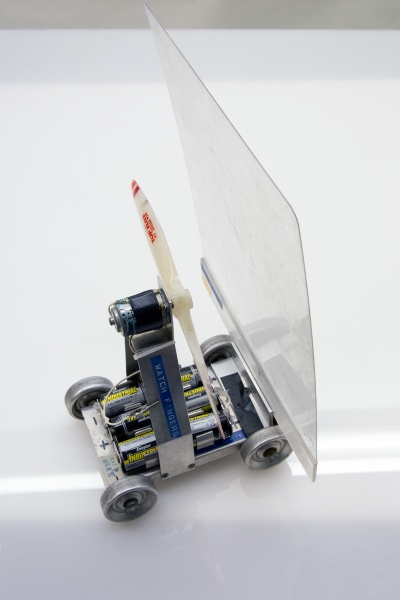 The device in the photograph above is called a "fan cart" because of the electrical fan mounted on it. The fan blows air toward the right in the photograph, so with the sail removed and the fan ON the cart will move to the left (click here for video).

On the other hand, with the fan OFF and the sail mounted on the cart, you can blow into the sail from the left with your breath or a larger stationary fan and make the cart move to the right (click here for video). Notice that the propeller is not rotating, and the wind from the stationary fan at the left causes the sail to bend to the right.

When the fan is turned ON with the sail mounted on the cart, if you hold the cart still, you can again notice the sail bending due to the air from the cart fan blowing into the sail (click here for video).

Suppose that the sail is mounted in place as shown in the photograph, the cart fan turned ON, and the cart released to move if it wants to. What will the cart do?

The answer is (c): the cart will remain motionless (click here for video).

Air from the surrounding area, initially at rest, is caught up and accelerated by the fan, causing a reaction force that would propel the cart to the left. However, that same air strikes the sail such that its motion from left to right is changed to motion outward, parallel to the sail. Thus the sail experiences a force to the right that is equal in magnitude to the leftward reaction force on the fan. Because the fan is attached to the cart, these two forces, being equal and opposite, produce a zero net force and create no motion of the cart. This is seen in the video.

Actually, this problem is fairly simple, but can be made much more complex by changing the shape of the sail. If the sail were larger and cup-shaped, it might redirect the air so that it exits the cart to the left, and the cart would then move to the right. On the other hand, a sail so small that it failed to catch all of the air from the fan would not cancel all of the force on the propeller, so the cart would move to the left.

The fan cart shown in the picture was designed by PSSC to illustrate equal and opposite forces and result in no motion.