This week's question focuses on a little toy duck, shown in the photo below. 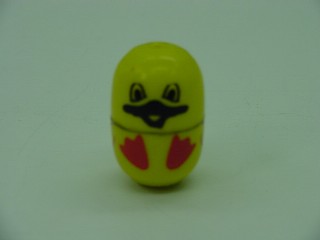 If you click on the photo, a video will load, and you will see that when knocked over, the duck wobbles back and forth in a remarkable manner.

For this to happen, there must be a hollow cavity inside the duck, with a ball rolling around in it.

The question: What shape is the cavity?

The arrow on the drawing shows which way is up - ie the head of the duck.

The answer, surprisingly, is (a)!

You would think that a cylindrical cavity (a) would yield stable equilibrium if you simply lie it on its side, which does not happen, although it might stand on either end if the cavity were closer to the end than to the sides. Note that if we push the duck over on one side we must lift up the end that was originally at the bottom (very slightly) to get it to stand upside-down, as seen in the video. Cavity (b) would only allow it to lie on its side. Cavities (c) or (d) would only allow it to rest with one of the ends up, but not both.