Relativity In The Classroom: The Free-Falling Reference Frame - Question of the Week 10/13-10/17

A box containing two spring-loaded cannon hangs by a magnet within a large vertical frame, as seen in the photograph below. 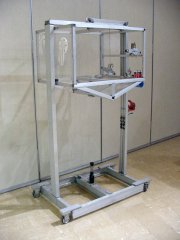 Each cannon is lined up with holes in a plastic sheet about half way across the box, and a cloth receptacle covering a second hole, also aligned with the cannon, at the left side of the box.

The cannons will fire large ball bearing projectiles if the appropriate switch is pushed. Click cannon #1 to see the front cannon fired, cannon #2 to see the rear cannon fired, or both cannons to see both cannons fired simultaneously. Short videos from the point of view of an observer in the reference frame are also available for cannon #1 and cannon #2. Notice that the projectiles do not make it through the holes in the plastic sheets at the center of the box; gravity has the nasty habit of pulling things downward, and they are not fired with very much speed.

Now suppose that the box is released by the magnet and allowed to fall freely with the acceleration of gravity. Further suppose that immediately after the box begins to fall the cannons will be fired, so the projectiles are moving from right to left across the box while the box is accelerating downward. What will the balls do? They might hit below their respective holes, as in the case when the box is at rest. They might go through the first hole, but not through the second hole and into the receptacle. They might go through the first hole and into the receptacle. Or, they might hit the center plastic sheet above the hole. Notice that the second cannon travels at a much larger upward angle than the first cannon.

When the balls are fired in the accelerating reference frame:

The answer for both balls is (c): both balls will go through their respective holes and into the receptacle, as seen in an mpeg video by clicking your mouse on the photograph below.

Because the path of the ball from the cannon to the receptacle is a straight line, each ball must have gone in exactly a straight line in order to get from the cannon to the receptacle as the frame of reference was falling, exactly as it would have done in deep space in the absence of any gravitational field. Many experiments work only in inertial frames of reference, that is, frames of reference which are subject to no external gravitational forces and no net acceleration. However, many of these experiments will work for short times (long enough to establish the law of physics) in a "local inertial frame of reference." The laws of physics will work even though the frame is not a true inertial frame of reference, but only acts like one for a limited time.