New Demonstration: The Paramagnetism of a Dysprosium Pendulum

Pendula of different materials are suspended here from a horizontal rod. As a large magnet is moved in next to them, we see an unsurprising response. The steel pendulum leaps over to the magnet; the wooden pendulum is entirely unaffected. There is a third pendulum, however, that appears to be slightly, but not very strongly, attracted to the magnet. The bob on this pendulum is a lump of dysprosium, as seen in our new demonstration, J5-15. 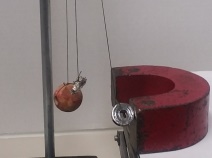 Dysprosium is a rare earth element that historically has been noteworthy primarily for being difficult and expensive to refine, and for having very few real world applications. It has been joked about as being one of the most useless of elements. This is not really true, though. Late 20th century chemical processes have made extracting it somewhat more practical, and it does have a few uses when in combination with other materials – it is a minor component used in making neodymium magnets, compounds of dysprosium are used in high powered floodlights (remember gas discharge lighting from last month’s blog post?), and it even has uses in making industrial radiation detectors. Mostly, though, these are often forgotten about because dysprosium appears as a small component of another chemical or system.

Dysprosium on its own does have one interesting property, though: it is a paramagnetic material.

Paramagnetic materials are those which are only weakly attracted to magnetic fields. The reason for this is complex, and relates to the quantum behaviour of electrons.

Interestingly, materials can switch from being ferromagnetic and paramagnetic depending on temperature. The temperature at which they make this transition is called the Curie temperature, after Pierre Curie, who performed important early research on paramagnetism in the 19th century.